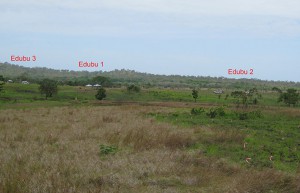 In this thesis I explore the applicability of the ethnographic settlement-subsistence model of ‘inland’ versus ‘coastal’ cultural groups to the archaeological site Edubu 2. Edubu 2 is located 1.17 km inland in the Caution Bay foothills, Papua New Guinea. Human occupation at the site dates from ca 2950–1360 cal. BP. Ethnographers and colonial observers of the late nineteenth and early twentieth centuries, and some archaeologists of the late twentieth century, have developed a dichotomous settlement-subsistence model regarding two Caution Bay language and cultural groups. The Koita were described as an inland-focused people based on their settlement and subsistence patterns. The Motu, on the other hand, were described as a coastal-focused people. To test this dual model, shell remains from Edubu 2 are identified, quantified and categorised into their originating habitats, in order to establish which resource zones were being accessed by the past inhabitants of the site. Analysis and subsequent interpretations suggest entirely coastal-focussed subsistence resourcing, and a shunning of freshwater environments by the past inhabitants of inland site Edubu 2. Thus, the model of inland versus coastal peoples cannot be applied to Edubu 2. In effect, this study questions the veracity of the original ethnographic model, and highlights the total omission of shellfishing from colonial observations in the broader Port Moresby region.

Garamszegi, A.
‘Inland’ versus ‘Coastal’: An Analysis of Archaeological Shell Remains to Determine Habitat Exploitation Patterns at Edubu 2, South Coast of Papua New Guinea
June 2015
80
S129
Thesis Abstracts
Download
You must be a member to download the attachment ( Login / Sign up )