Review of ‘The Uses of Style in Archaeology’ edited by Margaret W. Conkey and Christine A. Hastorf 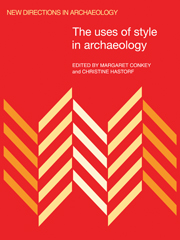 The volume edited by Conkey and Hastorf is a result of a small weekend conference held at the University of Minnesota in 1985. It contains five papers by conference participants, as well as four solicited chapters providing additional views on the subject. They are preceded by a brief introduction by the editors, and the last chapter, by Wiessner, is a commentary summing up aspects of the preceding chapters that seem to relate to her own work.

A significant development in archaeology has been the realisation, during recent decades, that style, traditionally seen as an analytical tool of the discipline, also determines the way archaeology is conducted. Archaeology is generally about style, the perceived styles of artefacts, or of archaeologically perceived classes of data generally. Yet most archaeologists seem unaware of the fundamental dual role of style in their field of study, and of the effects of not adequately differentiating between the different concepts of style. On the one hand, style is perceived by the investigator, who manipulates apparent stylistic variables in order to determine what may have constituted a style, or, as Weissner suggests in this volume, what was communicated in the past – the purpose usually being to reveal social or cultural units in the archaeological record. On the other hand, there is style as an aspect of the cultural dynamics of a living society. This book is a timely and most welcome attempt to untangle the perceptions of the roles of style in archaeology.

Conkey’s competent exposition of the historical and theoretical issues of experimenting with style establishes a useful baseline for the book, but one which most authors fail to refer to effectively. Her perceptive analysis of the shortcomings of the New Archaeology is as clear as her academic candour (in admitting the accommodative nature of her own adaptationist thinking of some years ago) is impressive.

Davis, appropriately, offers an art-historical perspective, expressing a preference for descriptive flexibility to the check-list approach of the materialist archaeologist, and rejects perceived correlation between stylistic description and archaeological entities. The ‘happy ambiguity’ of style is also supported by Sackett, who presents a re-appraisal of his earlier concepts of isochrestic style. His dialectic with Binford remains unresolved, but the debate with Wiessner has led to constructive re-examination on both sides.

Among the difficulties to contend with are the definitions of style by specialists of differing inclinations and preoccupations. Hodder’s definition, ‘a way of doing’, seems of little help in this book, irrespective of its actual merits. It merely provides for Wiessner the opportunity to note that such a definition would embrace all behaviour and thus be meaningless. Hodder does indeed include genetically encoded forms of plant life (one might presume that plants lack the ability to ‘do’ things), so his concept of style differs significantly from that of other contributors. Since he is basically right in crediting the use of a scientific style of discourse with revealing archaeology’s lack of scientific status, it would have been of benefit to archaeologists if he had presented his model in terms of the dual role of style as perceived by the editors.

Four case studies follow. Macdonald presents a multi-level analysis of mortuary data from two American Plains groups. Plog addresses stylistic variation (as he perceives it) in pottery from the American Southwest, using materialist statistics. Earle sets out to demonstrate how style and iconography can be applied to legitimising systems of political control in complex chiefdoms, such as those of Hawaii and of the Olmec. Most of this is good, solid American empiricism and confirmationism.

De Boer presents a most informative contextual case study of stylistic variability, which more than any contribution in this volume provides a glimpse of the true complexities of style. His analysis of the ontogenic, social, skill-related, functional, structural and genealogical aspects of Shipibo-Conibo art (northeastern Peru) is both authoritative and highly pertinent. The production of this geometric art is the exclusive preserve of females (by the age of 10, males pretend almost complete ignorance about the world of art), and it appears to be broadly emblemic. However, the style is at the same time ‘assertive’, in Wiessner’s sense, with stylistic variations being attributable to factors such as striving for individual identity as a result of unsatisfactory relationships within family units: ‘learning may lead to similarity or difference, depending on context’.

Finally, Wiessner poses the question. ‘Is there a unity in style?’ Her ethnologically derived ’emblemic’ and ‘assertive’ styles are archaeologically ineffective concepts. Not only can ethnographically accessible styles have both functions at the same time, how would the archaeologist decide into which of her categories an archaeologically derived (ie merely postulated, not demonstrated) stylistic class fails? Wiessner, like Sackett, still seems to cling to a belief that archaeology can reliably locate ethnicity.

This volume demonstrates the existence of a healthy pluralism on the subject it seeks to explore, while providing comparatively little actual progress. The reader is left with the impressions that there are as many concepts of what style is, as there are writers; that the ‘reliable’ detection of style in archaeology is a subject from which it is best to steer clear if at all possible; and that one will meet vigorous opposition with whatever one decides to say about style. The book’s major omission is its total neglect of ‘prehistoric’ rock art (apart from a very brief reference in a footnote). After all, it is in the field of rock art studies that the ambiguity of stylistic analyses has been perceived most clearly, and that the most decisive measures to escape the gravitational pull of style have been taken. Leading protagonists now speak of a ‘post-stylistic’ era of rock art studies (Lorblanchet 1990:20). Surely when a discipline that had been almost synonymous with stylistic taxonomisation unceremoniously discards style, it would be timely for archaeologists to consider the reasons. It is the book’s silence on this subject that renders the volume essentially superseded.

Bednarik, R.G.
Review of 'The Uses of Style in Archaeology’ edited by Margaret W. Conkey and Christine A. Hastorf
June 1991
32
75–76
Book Reviews
You must be a member to download the attachment ( Login / Sign up )