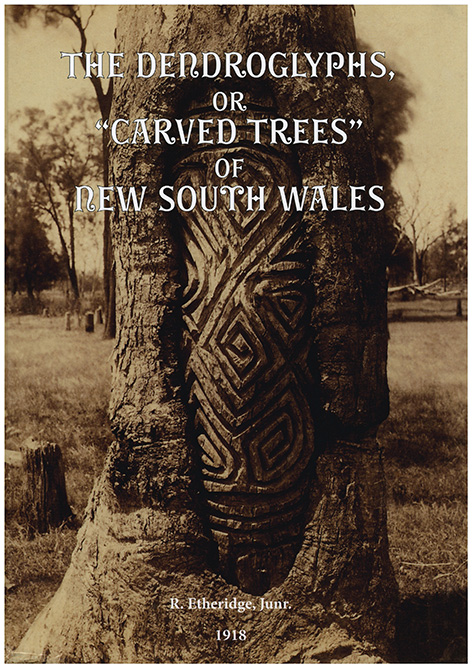 In central-western New South Wales (NSW), traditionally the graves of important Aboriginal men were marked with trees whose trunks were incised with complex geometrical patterns. Perhaps the best known of these is Yuranigh’s Grave, near Molong, now an historic site managed by the National Parks Service, Office of Environment and Planning. Yuranigh was guide and adviser to explorer Thomas Mitchell on his last expedition into the tropical interior of Australia in 1846. When Yuranigh was buried in about 1850, with four carved trees marking his grave, Mitchell arranged for a European headstone to be added in 1852 honouring his life and work.

Carved grave marker trees of NSW, often associated with earthen mounds, ridges and paths, were first recorded by explorers John Oxley and Charles Sturt, and caught the attention of later 19th century ‘gentlemen ethnographers’, who drew and photographed, but also removed them. The most assiduous recorder and remover was Edmund Milne, Deputy Commissioner for Railways and Tramways of NSW, a collector of Aboriginal artefacts for over 40 years. Upon his death in 1914, he left his collection to the first national museum to be built in Canberra; after languishing for many years in the Canberra Institute of Anatomy it formed the basis of the Aboriginal collection in the National Museum of Australia (NMA) (Kaus 2003).

This beautiful book—a large format hardback with a stunning sharp photograph of a carved tree on the cover— was based on Milne’s work, using his extensive notes and photographs. It was originally produced and dedicated to Milne in 1918 by Robert Etheridge Jnr, the then Director and Curator at the Australian Museum. The back cover of this facsimile edition has two inset photos, both showing Milne posed next to a carved tree, holding a steel axe.

Etheridge was in fact a geologist with a long career in the NSW Department of Mines, which may explain why the original publication appeared in the Memoir Series of the Geological Survey of NSW. It was the final of only three publications in the ‘Ethnological Series’, the other two titles being Aboriginal Carvings of Port Jackson and Botany Bay (Campbell 1899) and The Cylindro-Conical and Cornute Stone Implements of Western New South Wales: The Warrigal, or ‘Dingo’, Introduced or Indigenous? (Etheridge 1916).

Etheridge, perhaps following Milne, distinguished between taphloglyphs (also known as ‘carved trees’ or grave indicators), and teleteglyphs (also known as ‘bora trees’). The volume lists and illustrates both forms in an extensive catalogue, including 37 plates which are mainly photographic but also include reproductions of earlier etchings and drawings. There are two maps of the state of NSW with coded locations of both taphloglyphs and teleteglyphs illustrating the localised distribution of both forms.

Etheridge was apparently not immune to massaging data to fit a theory. He concluded that ‘the distribution of teleteglyphs culture coincides, on the whole, with that of taphloglyphs’ (p.89), whereas the catalogue and the map show that they differ considerably: taphloglyphs occur in a tight cluster centred on Dubbo, while teleteglyphs are more widely distributed east of the mountains and on the Darling River headwaters (with only one in the Dubbo area). Recent widespread archaeological survey seems to confirm that carved trees were restricted to central and eastern NSW, with the only other known cluster occurring in a small area around Cairns (Grimwade et al. 1995).

These misgivings notwithstanding, the book is an historic goldmine—a remarkable compilation of historic records Australia-wide, including mentions of Melville and Bathurst Island burial poles and stone arrangements. Much of the information about specific trees was collected by Milne from named local informants, surveyors, pastoralists and a so-called ‘forest-ranger’, and the date of the information is provided.

Reading The Dendroglyphs or ‘Carved Trees’ of New South Wales, it would appear that none of Etheridge’s informants were Aboriginal, though the names of some of the dead honoured by the trees are given. This may reflect the bias of Etheridge rather than Milne. In 1913 Milne and his associates relocated the site of the first European record of carved trees associated with a burial, illustrated by John Oxley, at Gooboothery Hill, Lachlan River, in 1817 (Plate 1 in Etheridge 2011[1918]). According to Kaus (2003), ‘Billy Boyd, an Aboriginal man working on a nearby pastoral station informed Milne that the man buried in the grave was ‘a great Lachlan chief’ who had drowned while trying to cross the flooded Lachlan River’. The NMA holds an album, ‘The Oxley-Lachlan Arborglyph’, relating to this rediscovery, containing newspaper cuttings, letters, photos and a 1939 ‘listing of Aboriginal relics and their locations’ in the Hay District (No. 1992.0098.0001); thus Milne’s original material holds more information than was included by Etheridge.

Many of the trees collected by Milne were placed in the Australian Museum. Should they have been removed? They were vulnerable to clearing, cutting and bushfire. In the 1980s, working for NSW National Parks and Wildlife Service, I visited a collection in a station garden near Collarenabri. The Aboriginal elders with me were somewhat ambivalent; while they were disturbed that the trees were garden ornaments, they recognised that their survival was due to their removal to the garden. Otherwise, few of the trees recorded in 1918 are still extant (Bell 1982; Geering et al. 1991).

The re-publication of Etheridge’s monograph in 2011 coincided with an exhibition by the State Library of NSW entitled ‘Carved Trees: Aboriginal Cultures of Western NSW’. This toured small community libraries in western NSW, bringing Milne’s beautiful photographs back to their homeland. Some trees have returned home too: in 2010, Museum Victoria repatriated a carved tree to the Baradine community in northwest NSW. It had been removed 90 years earlier and acquired by the museum in 1921 through an exchange with the Australian Museum. The tree was carved in 1876 to mark the burial site of five Gamilaroi men (however, strangely, this tree does not seem to be listed in The Dendroglyphs or ‘Carved Trees’ of New South Wales).

Sydney University and the State Library are to be commended on reprinting this volume. It makes accessible an important and beautiful aspect of Aboriginal culture that has been mostly lost and, until now, largely forgotten.

Hope, J.
Review of ‘The Dendroglyphs or ‘Carved Trees’ of New South Wales’ by Robert Etheridge
June 2014
78
131-132
Book Reviews
Download
You must be a member to download the attachment ( Login / Sign up )